Here are top 10 reasons why the end of the world of Warhammer Fantasy Battles and the birth of Age of Sigmar was actually a good thing for the hobby. 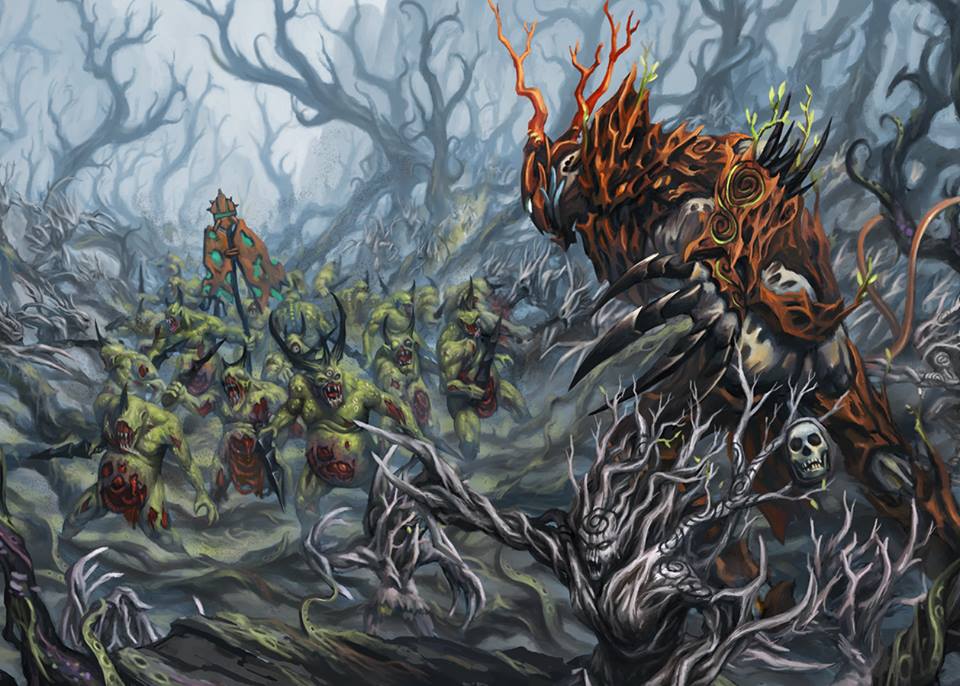 With Age of Sigmar came the Great Division: majority of the old races and factions were broken into dozens of sub-factions that can easily overwhelm a new player. On the other hand, though, each faction is now more focused on something specific, be it a range of models or a game mechanic. For example the old Vampire Counts got divided by the models/races of the faction: all things skeleton now make up the Deathrattle, zombies are the Deathwalkers, vampires are called Soulblight and ethereal models belong to the Nighthaunt sub-faction. Ghouls and Crypt Horrors got their own faction too as the Flesh-Eater Courts, along with unique and interesting background!

Other examples include melee-focused Ironjawz, monster-focused Beastclaw Raiders and warmachine-filled Ironweld Arsenal. Players can cherry pick models from the sub-factions to match their own likes and playstyles, mixing and matching to create a lovingly assembled army sworn to one of the four Grand Alliances. 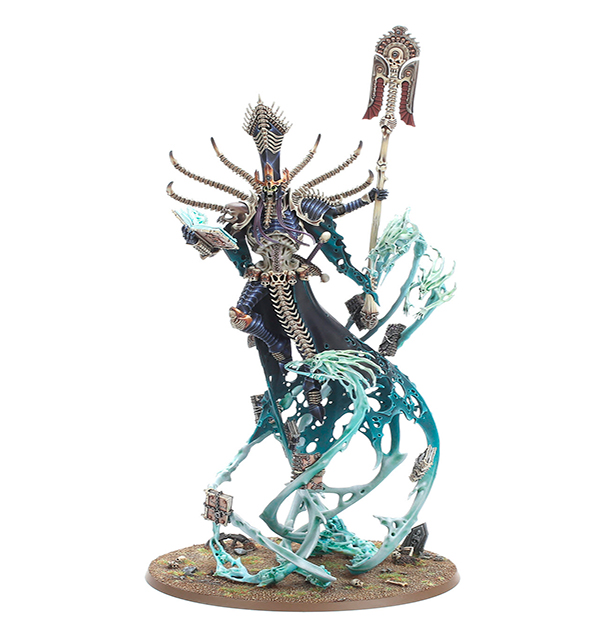 Age of Sigmar also saw the coming of new models and factions. A whole new Stormcast Eternals range was presented, along with a later addition of Extremis Chambers that featured monsters and monstrous cavalry for Sigmar’s chosen sons. Dwarven Slayers of the Old World were reborn as the Fyreslayers, a melee-oriented faction of half nude mohawk duardin with gold hammered into their flesh. Black Orcs got separated from the other greenskins to make up the Ironjawz with new models to bolster their ranks: bigger cavalry, bigger infantry, bigger heroes and a huge monster! Dryads and Treemen now belong to the Sylvaneth with Alarielle the Everqueen on his Warbeetle and a host of new tree-spirit-people models. 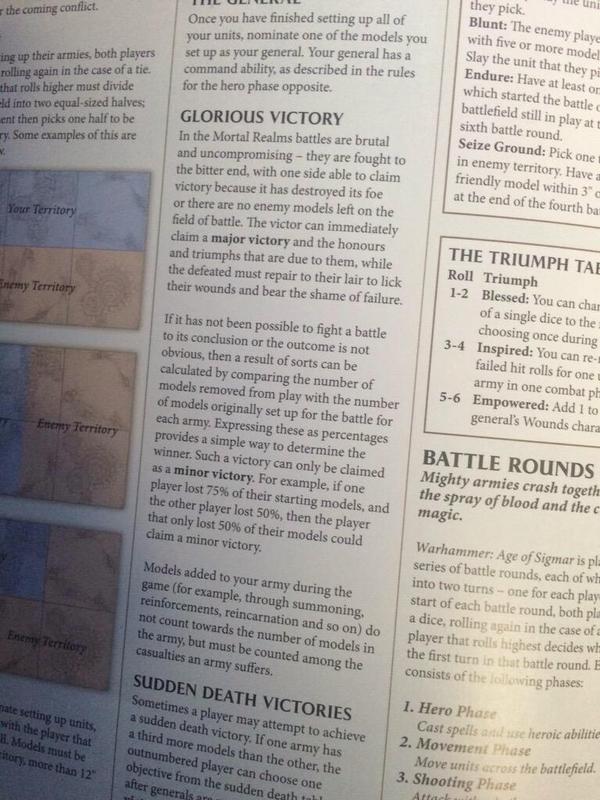 Teaching and learning the basic 4-page ruleset is the easiest way ever to get into the hobby of Warhammer. As soon as the players have even the slightest grasp on the rules and have the ability to read unit Warscrolls they are good to go: the deep tactics that are hidden in the games structure show themselves little by little as the newcomer gets some games under his/her belt. Compared to the 280-page Warhammer Fantasy Battles rulebook that could turn any potential new hobbyist away from wargames this compact ruleset is a blessing to the hobby. New players just pop in from every possible direction! In Fantasy Battles the time had frozen with the “two minutes to midnight” -theme written all over the place. The history of the Old World was rich, but the present time resembled something of a stalemate with no new storylines or advances anywhere on sight. Until the End Times that saw the destruction of the whole world and the birth of Age of Sigmar!

Now the story goes on in front of our very own eyes, with every book coming out either advancing or deepening the story and setting of the game, introducing new factions, Battleplans, army lists and describing the tides of the unending war across the Mortal Realms. The story of the game unfolds bit by bit with every new release, publication and event, making the game feel that much more alive and fresh! 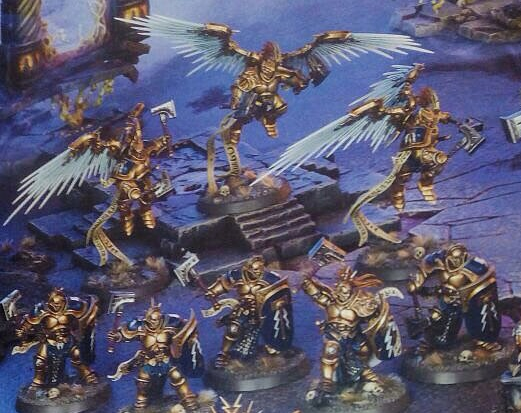 Up until the release of the General’s Handbook, no unit in the game was deemed completely useless. Why? There were no points costs or list building, no min-maxing to make your army list as effective as possible – only free open and narrative play where you and your opponent could dictate the size and composition of your armies however you wished to make for a great and enjoyable game. Even Chaos Marauders had their use in fluffy scenarios as eye candy and swarming hordes that swept aside all order that stood against them. With the point system added in, people will most often take Chaos Warriors instead for their double wounds, better attacks and armour saves.

But all is not lost because of the point system! The Open and Narrative play-styles still exist and let you use any troops however you want without thinking about min-maxing your army list. And even with the point system there are now less useless units than we ever had in Warhammer Fantasy Battles, to be honest.

Many who see Age of Sigmar for the first time think of it as a skirmish game, as compared to the regimental clashes of Fantasy. That’s partially correct, actually: the loose formations of units and rules for movement allow smaller games to flow more freely, creating exciting skirmishes, sorties and ambushes to play in an evening with a friend! Yet this does not mean Age of Sigmar can’t handle bigger conflicts; it definitely can. I’ve played many bigger games which flow just as freely and freshly as the smaller games, and definitely more fluidly than the huge games I played back in Fantasy Battles!

Streamlined rules and alternating player turns make even the largest of games enjoyable and relatively fast, especially if you have enough mates to move all the pieces with you! Age of Sigmar scales for different sized games very well in general, and much better than Fantasy did. Of course, smaller games have totally different strategies and tactical decisions than bigger games and that’s the beauty of it: changing the size of the games you play affects you gaming experience too.

The Old World of the Fantasy Battles was rich with history, nations, locations, heroes, battlegrounds, villages and cities… and while this really brought the place to life, it sometimes felt (at least to me) that the world was a bit too “filled up”. Where could you place the events and battles of your army without conflicting with the lore and history? How did your Empire state troops suddenly come to battle Tomb Kings or the Lizardmen? The solutions is of course as easy as coming up with a suitable story to back up your games, but I personally found this difficult as everything was already laid out for me. Did I want to confront my brother’s Beastmen at the very gates of Talabheim or some lonely village in the wild forests of Stirland? I felt constrained.

In Age of Sigmar you have the outlines of the Mortal Realms, each vast enough to hold everything you and your mates want. The new universe is vast and there’s enough room for everyone to have their very own corner of it to meddle with as they see fit. Every race is represented in each of the Realms, with no strict geographical locations to tie you or your forces down. Need to travel? Find a Realmgate, fight for it and lead your army to a whole new world of conquer and triumph! You’re free to make up stories and place your events as you like, either connecting with the main storyline or keeping it as your own small world. The choice is yours. 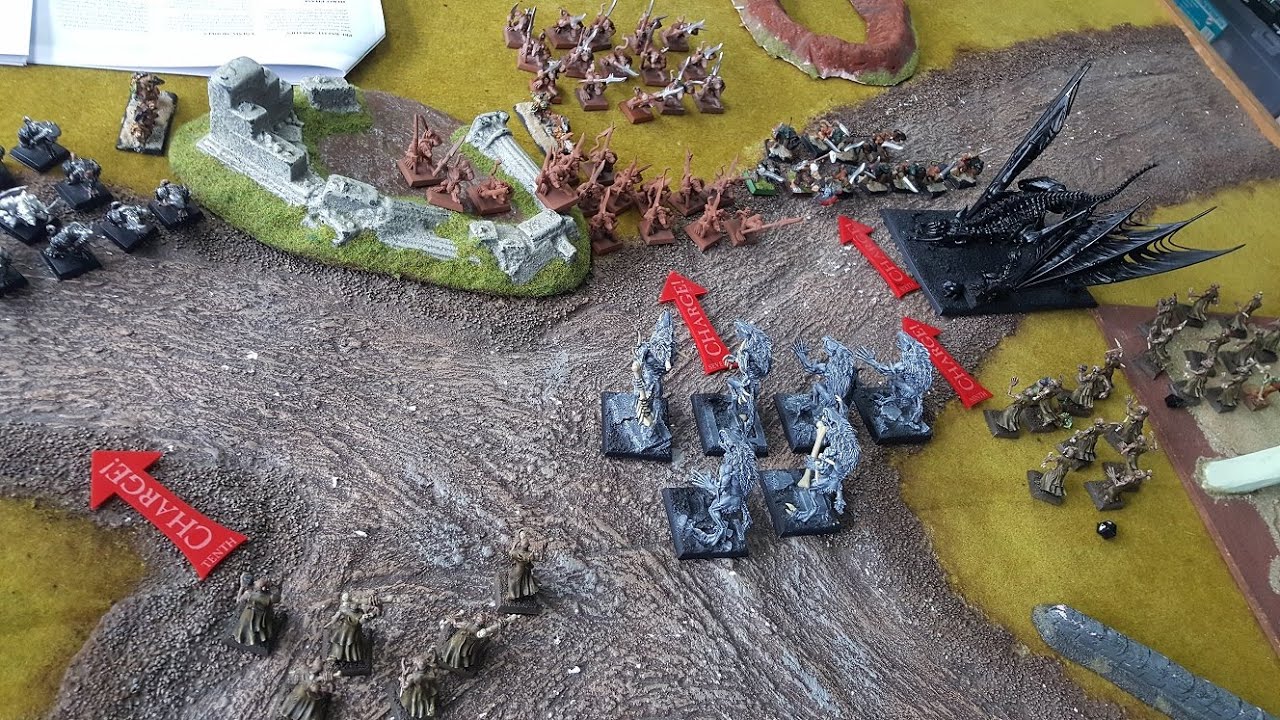 After the exhausting arms races of the 8th edition Fantasy, Age of Sigmar was a breeze of fresh northern wind.  Instead of competitiveness and powergaming, AoS introduced us to the casual aspect of playing with our miniatures! Like the designers said themselves, the mate you’re playing with doesn’t need to be your opponent and enemy; instead you can think of him as a co-director of an epic fantasy film you’re about to play out, with the miniatures acting as the cast! Together you enjoy the story unfolding before your very eyes, having good time and enjoying the models you’ve so lovingly painted and assembled for uncounted hours.

2. The Shackles of Pitched Battle Broken Everyone knows the Pitched Battle: you arrange models on the table, thrust them at your opponent and count the losses, screaming either in triumph or defeat. Fun, isn’t it? Not to me, no, I always wanted to play some kind of scenario but my opponents kept complaining that if their army got the underdog part then it would mess up with their “victory record” as the game wasn’t equally fair for both sides.

Age of Sigmar had the answer: Inspiring Battleplans to get you doing something else than just bashing in your opponents’ heads. I’ve had so many more close and exciting games with Battleplans than ever in Fantasy, we are literally spoiled with choice when choosing a scenario to play. Monolith? Last Stand? Storm the Walls? The Ritual? Just pick your favourite and get playing.

1. Power to the Community Ever heard of “the Season of War”? Yup, it’s the online global campaign for Age of Sigmar that saw the construction of three new fortress-cities in the Realms of Life and Beasts which the players all around the world could battle over by playing games AND painting Warscroll-worth units. We hobbyists actually got to affect the story of this great game that we now play and love, which is quite rare for Games Workshop titles. Is this an indicator of something changing for the better in the big GW?

Players also insisted for an FAQ of some kind to be put up for the grand total of 4 pages of rules we received when the game system aired. What was the answer? GW along with its games can now be found on social media and we actually got an FAQ at request. Is this a dream we’re living in?

If so, I don’t want to wake up just yet!

For more Warhammer content from me check out my own Age of Sigmar -blog at http://extrabushybeards.blogspot.fi/ for modelling, terrain, battle reports, campaigns and free-to-download casualty markers!