One of the last mainstays of the Dutch culture that once dominated the Holland area is the famous tulip festival. In May, when the tulips bloom, thousands flock from every state to celebrate the Dutch heritage and see millions of tulips in full bloom. Michigan residents believe that it’s actually a faux pas to pick a tulip in the downtown area, even when you’re a child.

The park is the perfect place to explore during the tulip festival. It’s located near downtown Holland and the DeZwann windmill is surrounded by nearly a hundred thousand tulips. The DeZwann windmill is the only authentic Dutch windmill remaining in the United States. There is also a selection of shops featuring Dutch goods and souvenirs.

Holland State Park ranks among Michigan’s most popular parks. It draws in over a million visitors a year. It’s got almost 1,800 feet of white sand beach and two campgrounds. The pier and boardwalk along the Lake Macatawa Channel are home to many great spots for fishing for perch, salmon, steelhead, and trout.

The Grand River is the longest river in the state of Michigan. It lets out into Lake Michigan in a little town called Grand Haven. Once upon a time Grand Haven was an important shipbuilding center on the lake. Nowadays it’s a relaxed and sleepy agricultural and tourist town. During the summer, population swells as people come to enjoy the relaxed atmosphere and good fishing.

The Grand Haven State Park is a 48-acre stretch of Lake Michigan beach with over 170 campsites laid out along an asphalt road. The campsites have neither shade nor privacy, but quite a few people seem to relish in the warm sand and enjoy the extended beach parties. 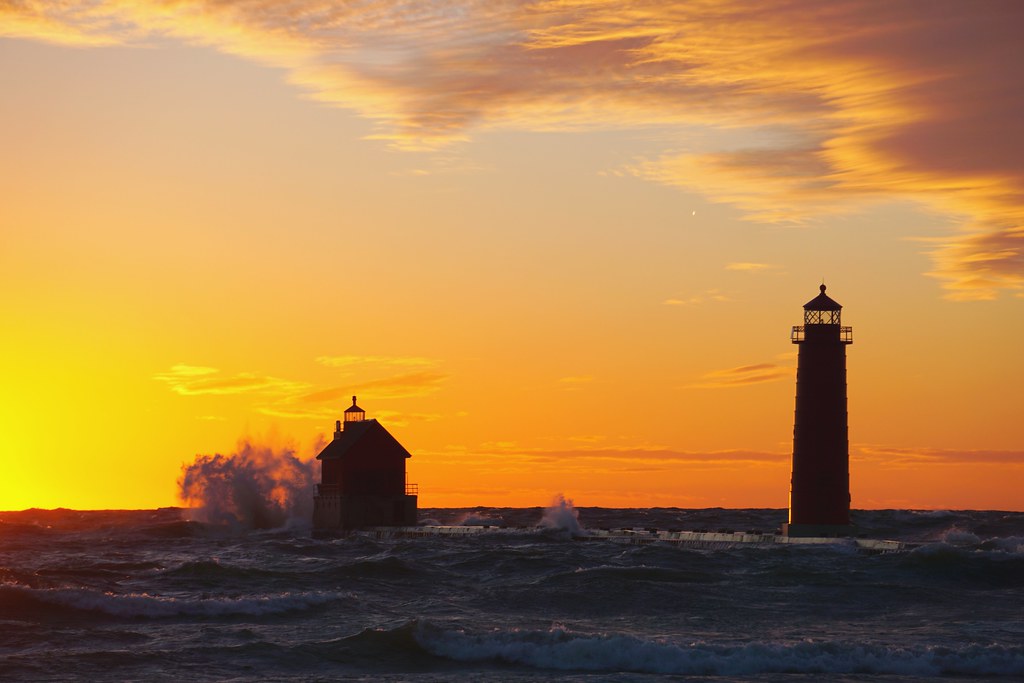 Just south of Muskegon, the P.J. Hoffmaster State Park offers a chiller atmosphere compared to crowds at the Grand Haven State Park. Here visitors can enjoy a day at the beach as well the natural beauty of Lake Michigan at its best. Most of the large crowds that flock here during the summer head straight for the beach, and the rest fill nearly 300 campsites at the north end and enjoy the hiking trails.

Tucked between the Muskegon Lake and Lake Michigan is the 1,300-acre Muskegon State Park. This park caters to all kinds of dwellers. Beautiful beach access is great for the beach goers, family campers, and for those looking for a bit more solitude, there are the dunes.

Right across the street from the campground is the Muskegon Winter Sports Complex. It’s nearly the only place near Lake Michigan where you can ride a luge on a specifically designed runway. It has a heated lodge and two skating rinks. During the winter it has a great opportunity to use the lake effect snow to utilize the 5 miles of lighted cross country ski trails.

Muskegon’s historic district is in the heart of the city’s downtown. It’s largely a tribute to Charles H. Hackley, a laborer who progressed from mill worker to owner. He provided Muskegon with a hospital, library, museum, and a park that all bear his name. His Victorain home, the Hackley House, is a wonderful and popular tourist stop downtown.

All up and down the coast, Lake Michigan is heralded as having some of the best lake beaches in the country. Between the ample fishing and the picturesque dunes, the beaches are the perfect summer spot. The perfect white sand is some of the rarest, and as such is mined frequently. Visiting the parks and beaches responsibly goes a long way towards protecting them.